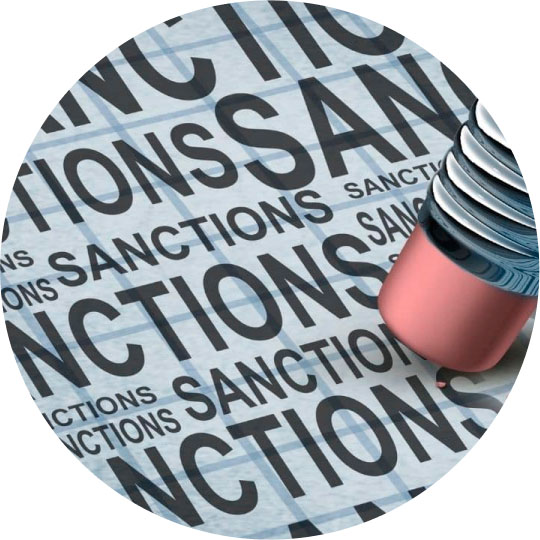 The international community uses sanctions to change the behavior of a country in the case where a country violates human rights, is waging war, or endangering international peace.

As a way to address major international law violations, human rights violations, and any other form of sponsored crime, a country imposes financial or economic sanctions against such nations globally.
The sanctions are applicable to a variety of financial restrictions imposed to achieve the objectives of foreign policy through pressure on the economy. Sanctions present a solution to political conflicts in geographical regions and avoid military intervention. Some sanctions initiatives include:

Since sanctions are financial solutions, their practical implications depend on the power of a country to implement them. Therefore, the issuing country needs to issue sanctions lists with an update information on targets while implementing sanctions compliance of the regulations on all people within their administration.

What are some of the Sanctions Globally?

Given the frequency of sanctions worldwide, financial institutions should understand their obligations and which sanctions apply within their administration. These include:

The UN issues a comprehensive sanctions list that clearly lists the names of its worldwide sanctions targets.

UN sanctions occur in three instances: violation of international human rights laws, activities involving violence within a country’s borders, and threats to international peace. A majority vote passes these UN sanctions. However, any of its five permanent members can veto their request.

As a result, this leads to a lack of UN action. For example, following Russia’s invasion of Ukraine in 2022, the Russian government utilized the veto power and blocked all UN sanctions against it. Also, China blocked its sanction against Myanmar due to the treatment of the Rohingyas.

Upon successful imposition of the UN sanctions, the other member states enforce all the relevant measures.

The European Union implements various economic sanctions against its targets.

The EU has since introduced sanctions regimes, such as cybercrime and global human rights, that target human rights violations. The European Union also allows the blocking statute, a legal measure preventing EU individuals from adhering with third party sanctions forced by a third country.

The HM Treasury implements and enforces the sanction list in the UK.

China’s economic status has grown exponentially and hence can exert global influence. Following the trade war with the US in 2019, China’s ministry of commerce, MOFCOM, announced that it would implement sanctions.

China implemented the Blocking Rules in retaliation to the US third-party sanctions that prevented Chinese companies from trading with North Korea and Iran.

The DFAT implements and enforces all sanctions for Australia.

Canada is one of the largest economies in Northern America; hence, the economic sanctions influence international trade. With the recent Russian- Ukraine war, Canada has imposed Russian sanctions. Canada has also sanctioned Myanmar due to the military regime.

The Office of Financial Assets Control (OFAC) upholds many sanctions programs on behalf of the US treasury.

The US sanctions regime, under the Biden administration is one of the most influential globally. This is because the US shares many global economic, geopolitical, and security concerns with other nations. Therefore its sanction programs align with those of the UK, EU, and the UN.

In 2016, the US introduced the Magnitsky Act, which targets specific individuals or groups found to violate human rights other than involving the entire country. The Act has inspired other nations to have similar human rights sanctions regimes.

In addition to the global sanction that applies directly to US persons, the US also implements secondary sanctions against third countries, even under the Biden administration. These sanctions block third parties from doing business with targets of the US sanctions at the risk of trade restrictions with the United States.

Sanctions lawyers who are well versed with rules in international economic sanctions are best suited to help you limit the risk of sanctions. The recent Russia sanctions have left many international companies at risk of violating sanctions.

Depending on the jurisdiction of your international trade, ensure that you choose the best lawyer to help you stay updated on the ever-changing sanction rules, foreign assets control, and export controls. You must ensure that our business doesn’t violate any economic sanctions.

However, if you, unfortunately, receive administrative subpoenas, you must comply and provide all requested documentation. You have been assured a smooth process through a sanctions lawyer as you remedy the situation.

What is the OFAC Agency?
The OFAC, an agency in the US Treasury Department, undertakes the task of regulating and enforcing US economic sanctions and trade embargoes involving foreign nations and targeted individuals. The agency takes action to achieve the US's national security and foreign policy goals. OFAC's legal authority comes from different geographical areas, from executive orders to international agreements.
Who are OFAC Sanctions Lawyers?
Sanctions enforcement by OFAC law firms involves complex and ever-changing rules and regulations. Any individuals or groups that become real or perceived threats to US economic sanctions policy or national security face sanctioning. When dealing with international commerce transactions, one must be aware of all OFAC compliance rules and regulations. Staying well-informed on all the shifting policies may be challenging, but OFAC U.S. sanctions lawyers can provide the best counsel. In addition, they can assist in specific licensing, foreign activities, or international legal needs.
What happens if found in violation of OFAC sanctions?
The OFAC sanctions rapidly evolve and have broad prohibitions and stringent liability. Unfortunately, it's easy for an individual or an entity to violate the most up-to-date sanctions without knowing that a violation occurred. It's very difficult for those dealing with foreign nations to stay up to date with the latest OFAC sanctions. You need to contact OFAC sanctions lawyers if; These notifications come in the form of a notice in your credit report. OFAC lawyers will provide legal advice and counseling about international business as well as assist you with the following matters: All US citizens or those with the property under the US administration fall under the OFAC U.S sanctions. Therefore, they need to proceed with extra caution while dealing with international business matters. It's possible to avoid possible penalties, arrest, or freezing of funds and assets. First, however, you need to obtain legal counsel from reputable OFAC lawyers to keep you updated on all security controls imposed by the US.
What are the Functions of OFAC?
Individuals or entities that engage in international business with blacklisted states or targeted persons may be subject to criminal penalties. In addition, individuals conducting personal transactions with friends, family members, or charities are also subject to OFAC U.S. sanctions. Willful sanctions violations will lead to criminal prosecution by the justice department. In addition, OFAC can hold a person civilly liable for the violation of the sanction, whether committed knowingly or unknowingly. Therefore, sanctions law is considered a strict liability offense.
Does OFAC outline Prohibited Transactions?
It's now easy to know if you are doing prohibited transactions by OFAC. OFAC retains a blacklist of targeted individuals, organizations, and groups known as the SDN list. Similarly, some U.S. sanctions apply to an entire country, regardless of whether they appear on the SDN list. Due to the global ever-shifting political interests, the SDN list is always changing with new targets and creating more legal regulations and new sanctions. To be up to date with the list, you need to contact OFAC lawyers who will guide you and also guide you in name removal from the SDN list.
How does a Country become a Targeted Foreign Country?
Political unrest in foreign states such as in Russia and Ukraine can lead to sanctions against the country once it's confirmed suitable for international trade. Then, almost without warning, foreign business affairs that are legal one day can become grounds for legal action the next day. Individuals or countries that support these nations become subject to asset freezing and denial of immigrants from entering the US. In addition, US citizens can't transact with such entities or people or take action to evade these U.S. sanctions. The OFAC sanctions laws seek to protect national security objectives and protect human rights. Some of the sanctioned countries include; Any financial transaction or support of individuals in these countries will violate the US sanctions. Therefore, involvement of any kind calls for an audit of compliance. An OFAC enforcement lawyer may help eliminate the risks of OFAC sanction through proper licensing and compliance.